wowintro, an online video impression platform, was founded on the idea of modernizing  workspaces by giving fresh graduates the chance to have a competitive edge beyond conventional black and whites. wowintro allows users a chance to communicate themselves to employers and opportunities through a 30-second video that may be attached on their profiles along with a résumé.

There's no denying videos are the new social phenomenon. Yes, YouTube has been the reigning “King of Internet Videos” since it was founded in 2005, but game-changers like Vine, Instagram and Snapchat have revolutionized the video sharing landscape in a monumental way- making less than 15-second videos the way to go. Even social media giant Twitter, who's core service is the curation of words in a short text (140 characters specifically), introduced a live video streaming platform, Periscope, to their service. In just three months Periscope has already acquired more than 2 million users and is still growing.

In this day and age, videos have become a doorway to opportunities for anyone bold enough to put themselves out there. Over the last few years, countless artists, musicians and actors can thank YouTube as the platform that propelled them to stardom (read: Justin Bieber). Even specializing as a YouTube personality, or better known as “YouTubers,” have launched careers for individuals like Tyler Oakley and Pewdie Pie. Just like YouTube, Vine also played a hand in the discovery of artists and personalities like King Bach and Zach King, birthing the term “Vine Famous” in just the two years since its launch in 2013.

This is all possible because videos are fun, fast and most of all, entertaining. They're a great way to express yourself and your creativity by allowing you to “show” instead of “tell.”

Which is exactly what wowintro can do for users. By being the first video impression platform for opportunities, wowintro allows users to take matters into their own hands and do things for themselves. Understanding the benefits that videos present, users can showcase their personality, talents, skills and how they carry themselves- aspects that can never be represented solidly through a piece of paper. Users have full creative control over how they want their video to be and the content of their wowintro.

It's all about doing it by themselves with their personal standards, comfort and feel. Users no longer need to solely rely on a single sheet of paper to decide which opportunities are within their reach. This way, users can show a glimpse of who they are and allow others to form a positive first impression on them without even meeting yet.

If a 6-second Vine video can open doors never considered and create careers once practically unheard of, just imagine what a 30-second wowintro can do for you.

CONTACT US
mktg@wowintro.me
GET TO KNOW US
Blog About Us
Basics FAQ User Agreement Privacy Policy
Change To
Mobile View
Subscribe to one of our premium packages today to access this feature.
By subscribing, you’ll get a host of other similarly exciting features such as this!
Learn More 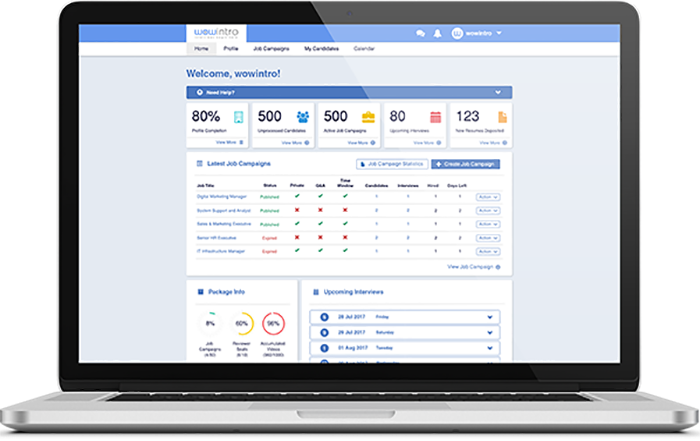